Snoezelen is a word coined from a combination of the two, and was originally started in the 1970s in the Netherlands as a leisure activity for people with severe intellectual disabilities.

In the Snoezelen Room, the space where this activity takes place, things that gently stimulate the senses, such as light, sound, smell, vibration, and tactile materials, are effectively arranged.
In this space, users can enjoy their favorite senses and have a special time with no one telling them what to do.

In the 1980s, when aromatherapy, touching care, music therapy, and other forms of warm care began to attract attention, snoezelen developed mainly in Europe as part of a movement to unite them.

In recent years, it has spread to more than 30 countries around the world, and is often used as a therapeutic approach to change thoughts, feelings, and behaviors by using sensory stimulation that is comfortable for the person.

There are three elements that make up a snoezelen: (1) the user, (2) the caregiver, and (3) the environment.

Today, the International Snoezelen, a global organization of snoezelen, defines snoezelen as.

Incorporating the conceptual framework, MSE/Snoezelen is defined as a dynamic pool of Intellectual property built on an ongoing sensitive relationship between the participant, the skilled companion and a controlled environment, where a multitude of sensory stimulation possibilities are offered. Developed in the mid 1970s and practiced worldwide, the MSE/Snoezelen is guided by ethical principles of enriching quality of life. This shared approach has applications in leisure, therapy, and education, and takes place in a dedicated space suitable for all people, particularly those with special needs including dementia and autism.

Purpose of using the snoezelen room

Today in Europe, snoezelen rooms (sometimes called by other names such as “sensory rooms”) are used for this purpose. 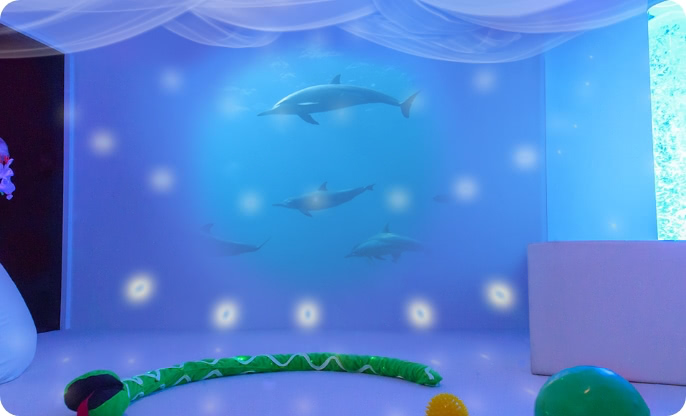 This type of use is spreading to community centers and nursery schools, and can be expected to be used in a variety of places in Japan.

Leisure? Therapy? Which is it?